The forecast this past Saturday was 71 and sunny. Sunday was even worse with a high of 66. Clearly this was not weather to be wasted.

The most obvious course of action was to head downtown and randomly wander, thus resulting in what had to have been at least a 6 mile walk through the streets and along the canal. We saw a lot (including things that can’t be unseen), and I’m still trying to process most of it.

We started walking along the canal with several other people, assuming they, too, were refusing to waste such a beautiful day. Until we came upon this.

After a brief timeout to think about what we’d done, we continued with the event crashing (turns out it’s like Lay’s potato chips – can’t crash just one).

This was pretty much the best event I’ve ever stumbled upon. It’s some homecoming type deal for IUPUI where they race canoes up and down the canal. I was all about the team that was rocking the cap and gown in their canoe. I was not, however, all about the lifeguard(?) rocking the Speedo, socks, and shoes.

That sight was definitely enough to kill an appetite for a lifetime. And yet. . . .

What they lacked in amazing foodness, they made up for in found-at-random-Chinese-festivalness. 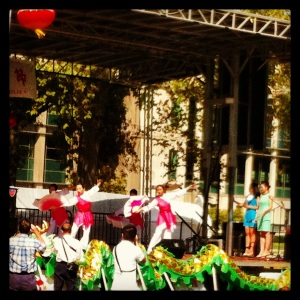 Naturally the one event we stumbled upon and didn’t stop at is the one I wish we had. The ISO was holding some sort of shindig for the start of their season. We narrowly avoided being accosted by creepy mascot type things, and I considered it a success. . .until we got home, I opened Nuvo, and saw where the ISO was holding free pop up concerts all day. :: sad trombone::

Some lessons you have to learn the hard way – like read the free paper in a timely manner. Or don’t leave your opulence lying in the street.

But our day ended in a beer flight for Jesse, wine for me, some of the best pizza I’ve ever had in my life, and German chocolate cake with toffee instead of coconut because homeboy at Thr3e Wisemen agrees with me – coconut belongs on a tree, not on a plate.

And that, kids, is one lesson I never have to learn the hard way. 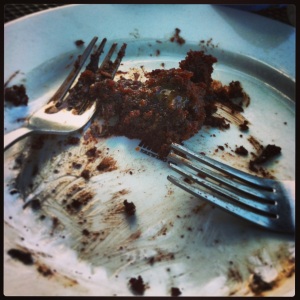 This entry was posted on September 24, 2013 by Jenn in Activities, Food and tagged canal, downtown, Indianapolis, Indy, Thr3e Wisemen.