Sometimes we like to pretend we’re crazy rich. And by that I mean Jesse makes it rain while I spin around in a circle. Often this totally backfires as we mostly have pennies, and I end up playing the role of the bruised sad girl. But Saturday, it was everything I hoped it would be.

We started with lunch at Mellow Mushroom in Carmel. The fact that Carmel has a Mellow Mushroom is something I’m still trying to comprehend since Mellow Mushroom doesn’t require a dinner jacket so much as a love for hippie culture. Per usual, we ate entirely too much and walked out feeling gluttonous, a feeling I assume crazy rich people feel on the regular.

When we pulled into the Mellow Mushroom parking lot, I saw a World Market sign and squealed with excitement. Literally. (Jesse particularly loves when I do that while he’s driving.) Obviously we couldn’t leave without going in – especially since my mom had told me World Market had all sorts of pumpkin shemoligan on sale. Naturally, I found nothing pumpkin until we were leaving and I saw the display right next to the door (forgot to mention – I like to walk into places with my eyes closed), but I did find the red wine sale and a sweet hat. 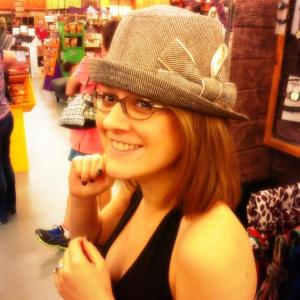 At this point, you’re wondering what any of this has to do with pretending to be crazy rich. To which I say: lunch in Carmel. Duh. Followed by. . .the Fashion Mall. They typically run a credit check before they let you in, but apparently my poor man Sperrys had them fooled and we walked right in like we owned the place.

We continued the charade through all the usual suspects (Pottery Barn, Williams Sonoma, Madewell) and then threw a new one in the mix – Restoration Hardware. Otherwise known as The New Love of Jesse’s Life. Seriously. Homeboy was smitten. But alas, he’s not a bachelor billionaire, and without a mansion to decorate, we left empty handed.

This entry was posted on October 8, 2013 by Jenn in Uncategorized.