While Jesse obsessively watched The Weather Channel and refreshed Twitter to follow the impending doom, I declared it too early to start drinking (mostly because I didn’t have enough alcohol to last all day and Indiana’s so progressive in its refusal to let you buy alcohol on Sundays) and fondly recalled better days while impatiently waiting for the Bears game to start.

Like Saturday, when we journeyed 2 hours north to the great metropolis they call Warsaw to obtain cheeseballs. What’s that? No sane person drives 2 hours to procure cheeseballs you say? Then you, my friend, have obviously never had a St. Anne’s cheeseball. Those things are like crack. Delicious, holiday flavored crack.

(They’re only $5 each and you can say you got a cheeseball at the hardware store. Seriously, Northern Indiana people, go buy one. . .or four. You can thank me for changing your life later.)

As an almost added bonus, we saw signs for parking lot chicken in Wabash. I got ridiculously excited before noticing the sign said they would be there Sunday. ::womp womp:: Rather than camp out overnight, we opted to feast upon stomach at Hacienda. Sans Ouch-Y-Wa-Wa Sauce for some things are better left in the past.

Real added bonus? Stopping at Kmart for a cooler. It was like a Bigfoot sighting – exhilarating and terrifying all at once.

All that followed by a miraculous Gamecocks win, and it was really too much for one day.

Let’s turn the hands of time back even further to last Saturday or, as I like to call it, the best day of my life (wedding shmedding). Remember when I won a gift certificate to Studio 2000, the swanky salon downtown? I cashed that sucker in with a haircut and eyebrow wax, and let’s just say it was even swankier than I thought it would be.

There’s a manned guard desk you have to walk by to get to the elevator, so from the moment you open the door, you feel underdressed. The eyebrow wax was the most relaxing eyebrow wax I’ve had in my entire life.

Normally eyebrow waxes happen at the hair washing sink while the conditioner does its thing, and by the time it’s over, you’re in serious need of a neck massage. Studio 2000, however, does it up right. You’re in a private room, laying down on a bed type thing while relaxing music plays. It’s magically weird.

The haircut was a little more on par with your typical salon haircut. If your typical salon haircut involves hitting the jackpot so it’s the owner who’s cutting your hair. And not only is he the owner, he’s also cut Dolly Parton’s hair which means you just got your hair cut by a celebrity stylist. For free. AND he mentions it’s not uncommon to run across Patrick Dempsey in said salon. I think we all know where you can find me in May.

And because hair magic is never to be wasted, we found our way over to the Hamilton Town Center holiday celebration. Yes, I realize this goes against everything I stand for in the fight for Thanksgiving, but how can you say no to free fireworks? 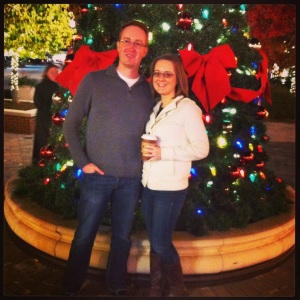 My favorite part of the whole thing, however (other than Jesse’s far off gaze as he imagines everything Santa will bring him), was when they did the countdown to light the tree and promptly blew the fuse. That, kids, is what we call holiday karma.

This entry was posted on November 18, 2013 by Jenn in Activities, Food and tagged cheeseball, Indianapolis, Indy, St. Anne's cheeseball, Studio 2000.