Saturday in the Park

Saturday was a rather big day for this household. After 7 years in the making, Saturday was the day Jesse officially became a White Sox fan. He was baptized in beer, communed on a turkey burger, and clothed in his very first White Sox shirt – which was, of course, the catalyst for the official conversion.

But this isn’t just any White Sox shirt. This is the one-hell-of-a-good-deal White Sox shirt. The make-the-extreme-couponers-openly-weep-tears-of-joy White Sox shirt. For this shirt was originally priced at $40, and through a complex maze of sales, coupons, and a brief trip back in time, we paid a whopping $1.90. I even had the cash to cover the cost! (And by cash, I mean half cash and half change because it’s 2014.) 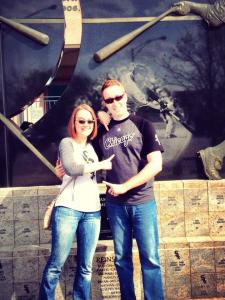 I honestly don’t know what my eyeballs enjoy taking in more – the man in the White Sox shirt or the receipt proclaiming an amount due of $1.90.

It was a pink out for Mother’s Day!

This entry was posted on May 13, 2014 by Jenn in Uncategorized and tagged White Sox.