If I Was In Charge

He just wants to see the giant flag. Won’t somebody let him in???

There would be no work outside of work. That’s right – you leave work, you leave the email, phone calls, and whatever else you’re currently dragging home with you (except your kids – you’ll still need to drag them home with you). I’m pretty good about doing this, and I promise I’m a million times less burned out than the rest of you. Jesse agrees so it’s pretty much fact. You can look for it on Wikipedia later.

Everyone would get the 2 weeks of Christmas and New Year’s off. No one’s really doing anything productive then anyway (unless you count online shopping and making endless to do/grocery store lists). 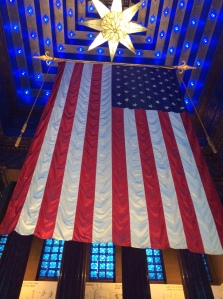 There it is! (Seriously. Go to the Indiana War Memorial. It’s pretty stellar.)

Stores wouldn’t be allowed to promote anything Christmas until after Thanksgiving. I know some of you are asking, “What’s Thanksgiving?” so let me help you out: it’s that holiday sandwiched between Halloween and Christmas that gets glossed over every year even though it’s the greatest holiday in the history of holidays (followed closely by Flag Day of course) where you do nothing but eat stupid amounts of food, take naps, and watch football. How are we not properly recognizing this day filled with spectacular? You disappoint me, America. You disappoint me.

I think this list has pretty well established I’m the right man for the job. So when you head to the polls this November (anyone have a calendar?), be sure to vote White (not racist – just an unfortunate last name for someone with such a bright future in politics). You’ll find me under the Awesome party.

This entry was posted on October 16, 2014 by Jenn in Uncategorized.