The Mini is Saturday, and I could not be more excited. Not so much for bragging rights of having walked 13.1 miles as for it being over. . .and also the cheeseburger I plan to demolish afterwards. 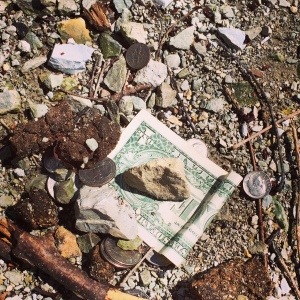 Carmel: where the dogs poop money

We heard Sesame Seed’s heartbeat Friday (yes, just one, hilarious people). I feel like that should be a defining moment of “holy crap this is really happening”, and yet I still feel distanced from it all like it’s not even close to being real. I could probably write a whole post on this alone.

Saturday, for the first time in over a year (I think), I didn’t wear my Fitbit. It was quite liberating.

Koala Yummies exist at World Market!!! You don’t have to go all the way to Japan/Epcot!

Jesse’s student loan is paid off!!!!!!!! I’m actually more excited about not having to hear about the damn thing ever again than having the money back in our lives.

Spring got real in the White house Sunday – I swapped out the flannel sheets for the regular sheets. No backsies.

Things I need for my entryway

I’m legit more upset over not being able to have a hotdog than a grown up drink at a baseball game this season. That’s normal, right?

The tiniest bunny camped out in our yard the other day. I wanted to pick it up and claim it as my own, but I also didn’t want rabies.

Minutes later, I lost those glasses on the streets of Chicago. And then our train killed a guy. It was a weird day.

Jesse had a dentist appointment to fix some fillings. The dentist is fluent in Dentist so when Jesse translated what was happening it went something like this, “The crown heights and contacts on the 123 Ecclesiasticals”. This is how I learned his dentist is Jesus.

This entry was posted on April 28, 2015 by Jenn in Uncategorized.