If I Had A Million Dollars

First of all, you wouldn’t know. This knowledge would be mine and mine alone. I may not even tell Jesse since he’d be convinced we should give it all away, I’d have to remind him it’s my million dollars, not his, and then things would just be weird forevermore. (For the record, I would donate some of it and continue to donate some of it as time goes on.)

My second order of business would be to find a really good money person so I can stretch this million into a lifetime of millions. I should probably invest in a lawyer, too, so when all my supposed baby daddys come crawling, I can make them go away. Let me live my secretly loaded life in peace, people.

And now for the real reason you’re reading this – to find out what sort of questionable financial decisions I would make. Things like renting out the zoo for the day so I wouldn’t have to deal with the crowd at the koala exhibit (although at $52 for 2 adult admissions, I felt like I paid for that privilege. Seriously, Indianapolis Zoo, pull it together. You’re a nice zoo, but you’re not that nice of a zoo). Or quitting my job and hiring a nanny because although I would love to spend all day every day with this tiny human I’m growing, I’m also going to need some adult interaction. Oh and I’m definitely hiring a maid. Maybe a chef and butler, too. 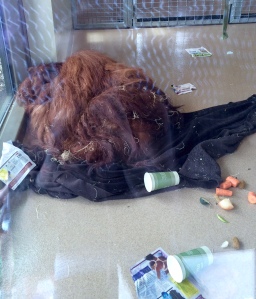 This is what my astronomical admission is paying for? Orangutan benders?

Also on the list of necessary staff? A jeans designer. You know what’s impossible at 5’3”? Finding jeans that fit. I had an easier time finding maternity jeans than regular jeans (and consequently may be wearing them forever – we’ll just call them built-in Spanx jeans instead of maternity) so while you may see this as a frivolous expense, I see it as necessary for survival. And since it would cut down on the shopping meltdowns, Jesse also sees it as necessary for survival.

Obviously part of my million would be wisely invested in a beach house in Charleston. And a private jet because peasants fly commercial, and I’m no longer a peasant. Also, I’m tired of having to put my liquids in 3 ounce containers, and you can bring all the liquids you want on a private jet. Let’s turn this sucker into a pool!

I guess I could spring for a pull up bar so someone could be a real man in the park.

And of course, if I had a million dollars, I’d buy you a green dress. But not a real green dress. . .that’s cruel.

This entry was posted on July 16, 2015 by Jenn in Uncategorized.