These fools have managed to keep me alive for 9 months now. That’s ¾ of a year. I’m impressed; I really didn’t think they had it in them. (Sidenote: I hear their concerns that I’m not very smart, but who’s doing fractions at 9 months, dummies?) 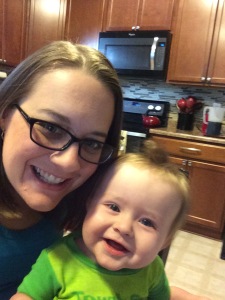 For my 9 monthday, I requested the ABCs be on loop all day. That ish is my jam. And don’t try to mix it up with Twinkle Twinkle Little Star. You can tell me it’s the same thing, but that song is garbage. The ABCs is where it’s at. Especially the end where you go, “Yay Boogsie!!!” I could listen to that for days.

I also requested all solid food be removed from the menu. I don’t know why these fools keep trying to poison me, but it needs to stop. 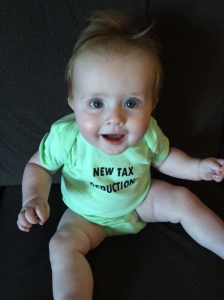 After 9 months on the outside, I’ve come to the conclusion that my favorite game is Throw Things. Here’s how it works: Mom or Dad give me something, I throw it. Bonus points when it’s my pacifier in the middle of the night. 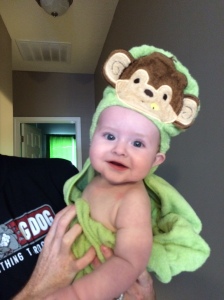 Some of my other favorite activities this month have been yelling (especially at random people when Mom and Dad take me out), blowing raspberries, losing my mind when I see Dad’s in the room but he’s not holding me, rolling around like a maniac, and going after everything (including Dad’s head/face) with my mouth wide open. You gotta taste the world before it tastes you, people.

As far as crawling, NOPE. Why would I move myself when I have people to move me for me? I do, however, enjoy taking the occasional step or two while the grown ups hold me up. Mom’s convinced I’m going to go straight to running and then be into EVERYTHING, but I haven’t decided yet. On the running part I mean. I’m already into everything I can reach/dive at so I see no need for that to change.

This entry was posted on August 11, 2016 by Jenn in Uncategorized and tagged mommyhood.