I had big plans of writing a real post about our anniversary, but I’ve felt forever behind this week, and I’m running on too little sleep and too much caffeine so instead you get random thoughts from my head movies. Happy Friday. (Awwwww, UIndy friends – remember Happy Friday? I should talk to the boss about bringing that back.)

I’m not sure when historians start taking your marriage seriously, but I think it should be at 5 years. At 5 years, you’ve been through some shit (sorry, Mom, but “stuff” just isn’t strong enough), and it’s really nothing short of a miracle you haven’t killed each other yet. That being said, Jesse and I celebrated our 5 year anniversary on Sunday. It worked out nicely since we were in South Carolina and could ditch the little baby child to go have a grown up dinner that included escargot. Yes, I ate snails, and yes, I liked them. The key is dim lighting so you can’t really see what’s happening. Being a glass and a half of wine in doesn’t hurt either.

Speaking of South Carolina, it took 10 hours to get down there and 10 ½ to get back. That’s a one with a zero, people. Do you know what happens when you keep an almost 10 month old strapped in a car seat that long? You give him an iPad and let him have at it. (Remember when I was walking around declaring I would never be the parent who relies on an iPad in the car because “hell, I only had a piece of paper, 2 crayons, and a juicebox to keep me occupied for 3 days”? What an idiot. The iPad is AMAZING. Everyone should go get one. Maybe 2 so you have a backup.) 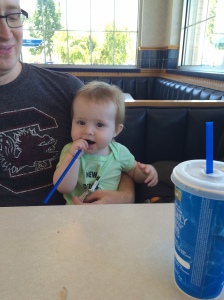 This just ended my love affair with dry shampoo. I actually only use it about once a week, but since the baby balds are starting to grow back in, I’m not taking any chances. The bald spots at my temples were not my favorite.

We’ve started being real grown ups and watching movies again. Crazy, I know. So far we’ve seen Hail Caesar (recommend), Dope (not a fan but Jesse loved it), The Big Short (recommend), and Spotlight (recommend – but please note it’s on Netflix so don’t let your husband hustle you into renting it from Prime when Netflix is being a turd). We remain forever behind on last season’s The Goldbergs, Modern Family, and Always Sunny in Philadelphia. The DVR is my Everest.

How long can a peanut butter sandwich live in a sandwich bag before it’ll kill you if you eat it? Asking for a friend.

My birthday was a few weeks ago, and I told Jesse not to get me anything since I already got myself everything from Nordstrom during the anniversary sale. He actually followed the rules, but found a loophole and helped Boogs get me something. Apparently everyone I see/talk to at daycare knew this was happening, and they all managed to keep it quiet. It’s officially the best birthday gift I’ve ever received.

There’s a fly in our house that I’m pretty sure is on its last legs since it does the slow fly into your head thing, but I want it to actually die because it’s annoying and gross. I’m actually trying to understand how it’s still alive. Jesse’s theory is it ate all the other flies and is now – wait for it – Super Fly.

And on that note, we’ll call it a day. I have a big night ahead of celebrating keeping a tiny human alive for ten whole months. How will we celebrate? Most likely by throwing some Cheerios around. . .while grunting and growling like the real men we are.

This entry was posted on September 9, 2016 by Jenn in Uncategorized.