One last shot of those long, flowing baby locks

I decided to finally tackle Boogser’s closet when I was off on MLK Day. You would think I would have tackled this months ago when I realized that although he’s in 18 and 24 month clothes, his closet was still filled with 6 and 9 month clothes. But this is me so I waited until I ran out of hangers. I had big plans of being a brave little toaster and taking all the stuff that doesn’t fit him to Goodwill this time. And then I started taking it out of his closet and dresser. Even though I’m still firmly Team One And Done, I can’t bring myself to part with anything. So instead of taking it to Goodwill like a normal person, I went to Target to buy another tub to hoard it all in the garage like a crazy person. Jesse says I have until the spring when he organizes the garage. He’s adorable.

Totally on board with this whole haircut thing

That weekend we finally got Boogser’s hair cut for the first time. We’d been talking about getting his hair cut for a few months, but a) I wasn’t emotionally prepared and b) that child is not a fan of holding still so we kept putting it off due to loss of ear fear. Then we hit the point of random people calling him a girl when we were out in the world which, while annoying, still wasn’t as strong a push as him constantly brushing his hair off his face and neck. Him waking up looking like Justin Bieber didn’t help.

We took him to Cookie Cutters, and I can’t recommend it enough. Every time he started to cry, she took a step back to give him some space and then gave him a new distraction – we went through the Cheerios I brought with us, the DVD he had little to no interest in, the drawer full of random toys, bubbles, and at least three combs. He was moving around like crazy, but she managed to get in there and I have zero complaints about the way it turned out. And, more importantly, I didn’t cry! Although I do get a little sad (and creeped out) when I look at his little lock of hair sitting on my dresser. 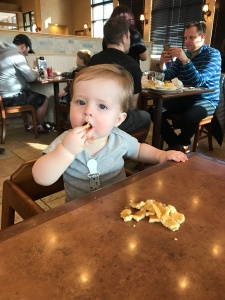 The next Monday was the mack daddy of traumatic experiences: day one in the toddler room. To say it didn’t go well would be an understatement. He went stage 5 clinger/screamer when I dropped him off, didn’t eat breakfast or lunch, spent the day ignoring the other kids, and did the “you’re not moving fast enough” panic cry when he saw me walk in to pick him up. This was followed by chugging milk like the cows were now dried up as soon as we got home and not sleeping that night. Repeat all week long and you understand why I was in tears 4 times on Friday. (Fingers crossed we turned a corner today – he traded me for a pancake with zero fight.)

No one’s really excited about the toddler room.

So remember when I said the smart parents space this crap out? Let’s go back and look at the dates. Monday, January 16th was closet day, Saturday, January 21st was haircut day, and Monday, January 23rd was toddler room day. That’s right. All of this went down in a one week span. ONE WEEK. Someone teach me to be smart.

This entry was posted on February 2, 2017 by Jenn in Uncategorized and tagged mommyhood.