I’m tired so today we’re going to talk about nothing. Just think of this as the Seinfeld of blogs. 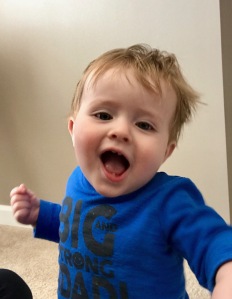 The line to be happily punched forms on the right.

Jesse successfully finished his first grad school research paper this week! It was due Sunday at midnight, and he turned that sucker in Sunday at 8:15 in the pm like the overachiever he is. We then celebrated with drinks in the living room at 8:30 and were in bed by 9 like the ballers we are.

In an attempt to give Jesse some peace to deal with homework, I took Isaac to Super Target. I explained to him it’s Mommy’s mecca, and I could see in his eyes he had no idea what I was talking about. But if there’s one thing that kid loves, it’s Target (and by Target, I mean people watching) so even if his eyes don’t understand, his heart does.

It took 35 years, but he finally got free birthday dessert!

I dodged a real bullet on Tuesday – Jesse got an email Monday that Soundgarden presale tickets were going on sale, and it was all I heard about that night. I told him I didn’t care if he went, but I really didn’t want to go with him. Tuesday morning he texted me to make sure I was still cool with him going, and as I told him yes, my insides filled with dread as I realized I was going to be dragged to another Soundgarden show (I really only got dragged to one Chris Cornell solo show, but I tend to call anything Chris Cornell Soundgarden). But in a twist of fate, he found himself a date! So now not only do I not have to suffer through a Soundgarden show, I get to hang out with one my favorite people that night while our husbands act like idiots together. In the game of life, I’m crushing everyone.

One of our neighbors works at Boogser’s daycare, and she was telling me this morning how the storm the other night blew another neighbor’s trampoline in half and then sent it rolling through the yards until it hit the house that’s catty corner behind us. I missed all of this, but obviously it’s the first thing I’ll be checking out when I get home tonight. It also made me develop a new appreciation for our neighbor’s fence; it may be 2 inches from my kitchen window, but at least it’ll keep their trampoline out of my house.

He got stuck under his walker and attempted to escape by throwing it off himself. It didn’t work.

We got our taxes back yesterday and in a surprise to no one, we owe the government money. We also learned our quarterly payments are going up this year. Oh, and the new tax guy is more expensive than the old tax guy (but we’re also not having to file an extension because the new guy has his shit together so that one’s a wash). Yet in all of this, what really annoyed me was that the wind destroyed my hair as I was walking to and from the tax place. If you need me, I’ll be over here doing all the other basic white girl things like lamenting the fact that it can’t always be pumpkin spice season.

And when I start talking about taxes, that’s when it’s time to wrap this up. I can’t leave you with taxes because that’s depressing so let me leave you with this: take some tortilla chips, put them on a baking sheet, dump leftover (or fresh) taco meat on top of the chips, top the whole mess with shredded cheese, bake at 350 for 5-10 minutes, top with guac/sour cream/whatever, inhale, and send me a thank you note.

This entry was posted on March 2, 2017 by Jenn in Uncategorized.