3:27 in the pm Tuesday meant we had officially kept this kid alive for a year and a half. Great job, everybody! 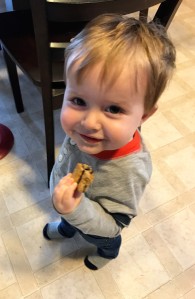 Remember when baths were the enemy? Tiny terror would now live in the bath if we let him. He walks around saying “ba ba” while beelining it for the bathroom whenever the thought of a bath enters his not so little head. Jesse had him in a dry bath (fully clothed, no water) the other day because it stopped the whining. There may have also been an afternoon where he was sitting in his baby tub in the front yard because he saw it in the garage, and, again, you do what you have to to stop the whining.

The only thing this kid loves more than a bath is outside. Favorite activities include opening and closing the mailbox, sitting on the electric box, eating nature, and awkwardly staring at the neighbors. He’s also a fan of looking for birds and loses his mind with excitement over dogs. You’ll know when he saw a dog because he’ll start barking. (Side note: he also barks at fences so either he thinks all fences are concealing dogs or he thinks fences are dogs.) 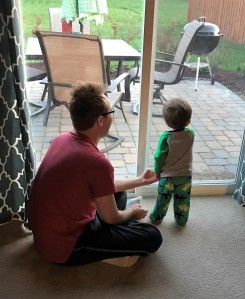 Did you know one and a half year olds can see ghosts? Because they can. Boogser is forever waving at the ceiling and occasionally likes to walk down the hall waving and saying hi like he’s in a parade when there’s no one there. It’s not creepy at all. 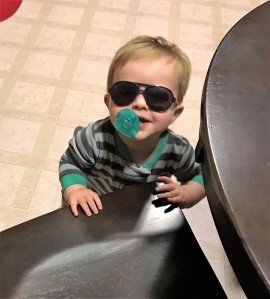 While he still looks 100% like Jesse, we finally got a trait that’s 100% me – walking. Once he took those first steps, he was off. There was none of this two steps for weeks on end nonsense; this kid was going big or he was going home. There’s still a bit of the Frankenstein wobble when he walks, but he’s mostly walking (and borderline) running like a champ. He’ll tell you bye as he leaves one room to go wreak havoc in another room, and it’s hilarious to see him walking down the hall while he’s on the phone. And, of course, seeing him run up to me when I pick him up from school is the absolute best.

Other highlights at 18 months: hoods and running away from us are hilarious, doing exactly what he knows he’s not supposed to do (while making sure we’re watching it happen) never gets old, eating like a champ at school while subsisting on mostly guac, hummus, Cheez Its, and cheese cubes at home is still the standard, and his reputation as the ladies’ man at school remains intact. Oh, and watching gorilla fights on YouTube with Dad never gets old.

This entry was posted on May 11, 2017 by Jenn in Uncategorized and tagged boymom, momlife, mommyhood.