Holy balls, y’all, the year’s half over! (For the record, I never say “y’all” but it felt right so I went with it. Oh and, Mom, sorry for the “holy balls”, but again, it just felt right.) Remember six months ago when I made a list of all the things I was going to accomplish this year? I figure halfway through the year’s a good time to see how that’s going. I was actually going to do this last week on the 1st like a real life champion, but my life was falling apart (and by falling apart, I mean we did too much over Memorial Day weekend and it took every ounce of energy I had to merely exist last week) so here we are 5 days into the half year. 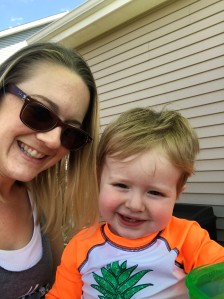 Blog more. Not to brag, but I’m totally nailing it. I’ve been pretty consistent with posting once a week, typically on Thursday. You’re welcome, world.

Dig my flute out of hiding. Ummmm. . .I moved it a couple times to get to other things. Does that count?

Less sugar. If we don’t count the entire peanut butter pie Jesse and I took down in 2 days last weekend (we should though because it was quite impressive), I’m all over this one. We were actually discussing this the other day as Jesse was whining about there never being ice cream in this house. I believe I played him the world’s tiniest violin in response.

Workout 3 days a week. Other than the month of February when everything was terrible, I’m all over this one. I got smart and started dangling a carrot in front of myself which has made it much easier for me to stay on track – April’s reward was a new tank top and May/June’s reward is a new Fitbit (which Jesse told me he thought about getting me for Mother’s Day but didn’t because he knows how much I love working towards a goal and figured I’d be mad that he “ruined” it. . .he may have been right).

Read 15 minutes a day. This one’s a little hit or miss, but it typically averages out to at least 15 minutes a day and that’s good enough for me. I mean, House of Cards isn’t going to watch itself.

One new recipe a week. This one is also a little hit or miss. It mostly depends how tired/lazy I’m feeling while menu planning for the week. We have, however, found some keepers like these shrimp boil foil packets and chicken fajita soup.

Learn how to curl my hair. This is still totally cheating since I technically “mastered” it before the year started, but I’m still curling like a boss. Hair curling, not ice curling. Ice curling would be way more awesome, though.

100 Day Project. This wasn’t on my list of goals for the year, but I thought I’d throw in an update anyway since it’s going so well. And by going so well, I mean I’ve done maybe 15 days of it when it’s officially over halfway over. Impressive, I know.

This entry was posted on June 5, 2017 by Jenn in Uncategorized and tagged lifegoals, resolutions.