Jesse finished up his third grad school class a few weeks ago which means he now has his Certificate [of Authenticity (or CoA)] so Saturday we pretended like we haven’t given Purdue all our money that doesn’t go to daycare, hired a babysitter, and went to St. Elmo’s for dinner to celebrate. I’m still mad Peyton wasn’t there, but I’m also willing to admit that place is worth the hype. I will never again get the shrimp cocktail (my nose is still burning), but the filet, king crab mac and cheese, lobster bisque, and I all had a moment. Just maybe read the steak weights on the menu so you aren’t shocked when a 300 ounce prime rib shows up in front of you. 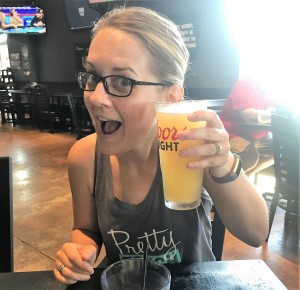 Sunday was another big day on the food front. We loaded Boogs in the stroller and went for a 289 mile walk and on the way back, detoured to Stacked Pickle for dranks and apps where Boogs made us order a second order of tots (he also told us he wanted to sit with the ladies, but we shut that down), and I took down my first beer. That’s right kids, at 33 years old, I had never had a beer. Technically I still haven’t since it was a shandy, but as all wine drinkers know, that’s the same thing. We stopped at the splash pad on the way back to the car which Boogs loves the idea of more than the actual thing, but he seemed to enjoy it enough that we’ll probably go back actually prepared (you know – a swimsuit, maybe even a towel) this weekend.

Also of note, Boogser’s demands. The child straight up demanded a dance party the other night after dinner – walked over to the speaker and did his little “more” gesture while dancing a little. As soon as the music started, he was a wild man. He’s also started requesting “guav” (guac) for dinner every night and his “paci”. The latter has me convinced it’s time to get him off that thing if for no other reason than I hate the word “paci”.

I talked about this on my Instagram Stories yesterday, but let’s take a minute to talk about Despacito. I don’t hate it. Why don’t I hate it???? It’s Justin Bieber. I hate everything Justin Bieber because Justin Bieber. And yet Despacito gets me every time. I’m going to give all the credit to Luis Fonsi just to make myself feel better about this situation. And pray for me, you guys. It would appear I’m weakening.

Speaking of music, I’m listening to the 90s Spotify radio which is always hit or miss, and right now it’s total garbage. No one wants Tom Petty or Black Crowes, Spotify. We’re all here for the Britney and J Lo. I’m aware I can help end this problem with the thumbs up/down, but I’m always afraid that’ll destroy the variety it throws at me (I mean, I like Foo Fighters and STP, too) and it will be forever ruined.

I tend to alternate between reading fiction and nonfiction, and I just finished Better Than Before. I was excited to read it because I like her two other books, but this one was just eh. I was expecting more of a tips on starting habits book but it was more of a here are the habits I started book. Jesse told me I should read The Power of Habit and Designing Your Life so those are next(ish) on my list.

You know how I like to set life goals for myself every month? No? Well, I do. This month it’s yoga once a week which sounds weak after a few months of workout 3 times a week, but it’s a struggle. I finally figured out it’s because when I workout, I want to feel like I worked out and got the calorie burn and yoga doesn’t give me that. But it does make me feel so much better so I’m trying to stick with it. It would probably help if I wasn’t doing it in my living room, but I’d rather spend the money on Booty Barre so here we are.

This entry was posted on July 13, 2017 by Jenn in Uncategorized.