I should have known we were in trouble when we were in line at The Pancake House and Boogs was being held by Jesse – his favorite person in the world! – but went diving for Miss Kara the second he saw her. But I didn’t. I just thought how great it was that he loved his teacher. 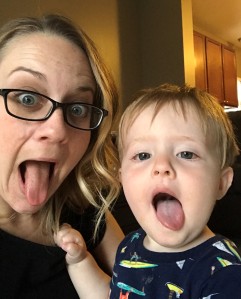 But now he’s a toddler and there’s no denying it: this child is a ladies man. When we go to a restaurant, he spends the entire time flirting with the waitresses. When we go to The Children’s Museum, the zoo, or the park, he will stop what he’s doing when a little girl walks up and either a) stare her down or b) go into show off mode. I had to pick him up early from school one day because he had a fever, and his teacher told me she knew something was wrong because “he wasn’t doing flirty face.”

A week later I took him to the splash pad where he chucked his pacifier into one of the fountains that he was rather leery of. As I was telling him that meant it was gone forever, a little girl who was probably 5 or 6 came running by, picked it up, handed it to him, and took off. He immediately went to chuck it again in an attempt to lure her back.

This kid’s not even 2, and I can already tell his future is going to be filled with either a white creeper van or multiple Maury appearances. I can’t wait.

This entry was posted on July 20, 2017 by Jenn in Uncategorized and tagged boymom, ladiesman, momlife, mommyhood, mommyproblems, toddlerlife, toddlerproblems.