Things men rarely do: take out the trash. If you’ve never lived with a man, you think I’m 50 shades of high drunk right now because society would have you believe taking out the trash is 100% man’s work. But man’s work it is not. 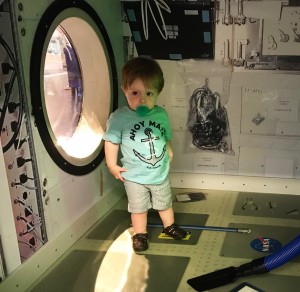 There’s no trash in space. Only sadness.

When a man sees a full trash can, he either a) precariously balances more trash on top, or b) smashes the trash down so he can cram more in there. Both actions occur while telling you, “I’ll take it out later.” But we ladies know later never comes. And so we take out the trash . And we take it out but good.

We don’t just drop that bulging bag of garbage in the bigger trash can sitting just outside the door to the garage. Oh no. We take that bulging bag of garbage all the way to the mother trash can the city comes by to collect. The one that’s kept at the front of the garage which means shoes are required to get to it. The one that smells like hot poopy diapers and rotting banana peels.

And since we’re already making the trash trek, we figure why not empty the trash cans in the bathrooms, the recycling bin, and the diaper genie? And so we do. And once we’re done, that man who promised to “take it out later” looks at us and asks, “Do you want some help?”

But yes, society. Taking out the trash is 100% man’s work. Thank you for noticing.

This entry was posted on August 3, 2017 by Jenn in Uncategorized and tagged chores, household, housework, marriage.