It has been a week, kids. You could probably say it started on Labor Day when Boogs threw up all over Jesse (the traditional 6th wedding anniversary gift is toddler vomit) and just went dormant until Sunday night when he had a fever. He had another fever Monday night, and on Tuesday, I got a call from daycare saying his fever was 104. Double good news: a) his fever was more like 101.4 and b) he’s going to live. In the middle of all this I got hit with some weird 24 hour stomach bug that led to me drinking chicken broth out of a mug like a weirdo, and now it’s Jesse’s turn. I knew I was in trouble when I walked in the door tonight and he was wearing a sweatshirt. I knew I was in man sick trouble when he took his temperature approximately 526 times in 2 minutes (he just took it again as I was sitting here writing this). I’m just waiting for the moaning to start. All this to say I’ve had zero time to think  this week which means the direction of this post remains a mystery to us all. 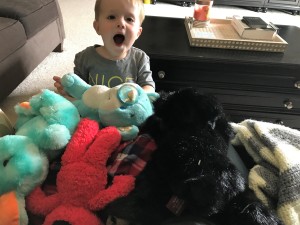 Because priorities, let’s talk about Boogser’s new trick. He’ll now point at his butt and say “shoo shoo”. Spoiler alert: it’s never poop. He just wants you to smell his butt which is, of course, hilarious. The life of a boy mom is quite the good time.

Have you watched Tiny House Hunters? Every single human on that show is 100% batshit. There was just an episode on about this couple who was selling their normal house so they could buy a sailboat and call that their house. Her main complaint was that the bed was going to be impossible to make because all the sides were against a wall. What did she expect when demanding a king size bed in a sailboat???

Jesse sent me the world’s greatest gif today. If I understood how the internet worked I’d put it here so you could see it, but I don’t so instead I’ll just tell you it’s a shirtless Putin riding a Ritz cracker. You can’t top that. (Cracker puns!)

I’d like to take this moment in time to come clean about something: I’m not in love with This Is Us. Everyone calm down. I watched a couple episodes but just couldn’t get into it. I don’t know if it’s too slow or if I’m just too wrapped up in yelling at the idiots on Tiny House Hunters, but This Is Us is just not my jam. I hope we can still be friends.

Speaking of break ups, I had to break up with our photographer. I loved the photos she took of Boogs, but I contacted her twice about doing a fall session and it was radio silence both times. What is that? If you’re booked up, tell me. If you don’t like us, just tell me you’re booked up. Jesse’s taking it pretty hard, but hopefully the new photographer’s work will help him get over it.

On a related note, we’ve been in this house for almost 3 years and finally ordered wall art for the living room! We might even get crazy and put the rest of the stuff up when we put the new stuff up. It’s supposed to be here any minute now so I’ll keep you posted. Try not to lose too much sleep over it.

This entry was posted on September 14, 2017 by Jenn in Uncategorized.