Everyone tells you the threes are more terrible than the twos which, as Boogs heads full throttle into two, aren’t exactly words of comfort. This kid is 90% savage already; I’m not sure I’m ready for the other 10%. 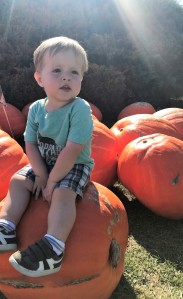 He may look angelic, but a tiny Satan lurks within.

He loves throwing things and lives for the chance to do exactly what you tell him not to do. He will legit walk around looking for ways to get yelled at. I’ve lost track of how many times he’s waited until I was watching and then picked up the coasters to throw or bang on the coffee table. He’s also been known to wait until I’m watching to briefly touch the outlet cover – just long enough to send the message that he’s his own man.

I took him to the zoo a few weeks ago where he tossed his sippy cup into the giraffe exhibit. I totally saw it coming, too. He was in turd mode and just the way he insisted on walking around carrying that damn thing I knew his end goal. So it wasn’t really a surprise when he nonchalantly dropped it through the fence (but the lack of surprise didn’t save him from a first name/middle name scenario). He then, of course, immediately started asking for water. This kid knows exactly what he does.

Yesterday I picked him up from school and there was a note on his sheet that said, “lots of pushing and hitting his friends” which translates to “brace yourself; it’s gonna be a night, y’all”. We got home where he proceeded to throw his dinner instead of eat it so I pulled the ultimate mom move and sent him to bed without dinner. He spent the entire time I was changing him into pajamas trying to hit and kick me while yelling, “SNACK!” Unfortunately for him, I saw the “SNACK!” move for the stall tactic it was and straight to bed he went. It was one of those nights that really questioned my resolve to not drink during the week.

I know some people are reading this and laughing hysterically because this is just the tip of the toddler iceberg (and Lord knows what awaits me during the teenage years), but as someone who’s only been at this parenting thing for a hot minute, I’m a little scared of my kid the twos right now. . .and I can’t even think about the threes.

This entry was posted on October 18, 2017 by Jenn in Uncategorized and tagged boymom, honestmom, momlife, mommyhood, realmom, toddlermom.