Not to brag, but as of 3:27 in the pm, we’ve officially kept this kid alive for two whole years. And not to brag again, but this kid’s really accomplished a lot in those two years. 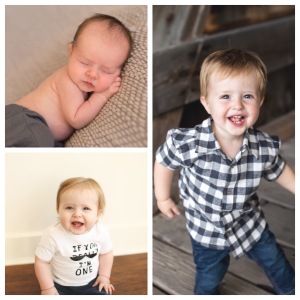 Remember when we were convinced he would never walk and I was 80% okay with that because it’s easier when they don’t walk? He now not only walks, he struts. Oh, and he runs. And sometimes when he runs (and walks and struts) he trips and falls, scrapes his knee, and needs a Band-Aid. And a Band-Aid on his knee renders him an invalid. He’s 1000% sure he can’t bend his knee – and therefore can’t walk – if there’s a Band-Aid on his knee. He also has a habit of not paying attention to where he’s going and walking/running straight into things – mostly walls. He’ll hit it hard face first (like hear it across the house/leave a mark hard), and depending on how tired he is, he’ll either handle it like a champ or like it’s the end of the world. The end of the world makes me feel better because then I think maybe he’s not headed straight for the frat house (he’s totally headed straight for the frat house).

We started letting him use a spoon and fork a few months ago, and he now demands one or both anytime there’s food in the vicinity. Mostly he uses it as a drumstick or to paint with the guac/hummus/anything else on the table, but every once in awhile he’ll use it like a civilized human, again giving me hope that maybe he’s not headed straight for the frat house. And then he dashes that hope by slinging his plate around and telling us “all done” while throwing all remaining food on the floor. 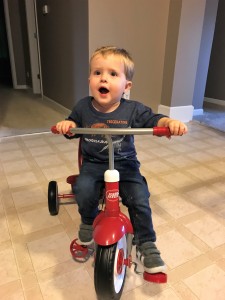 At some point in his little life, he mastered the art of the straw. We didn’t teach him, daycare didn’t teach him; he was just born a straw savant. He can even handle holding the box of milk at Chipotle without squeezing it everywhere. Which is good because this child will not stand for someone holding his milk for him.

He also won’t stand for waiting around for you to give in to his demands; he now does the “okay” for you.
Example:

Boogs: Apple.
Me: You want an apple?
Boogs: Yeah. Okay!

He’s not out of control at all. 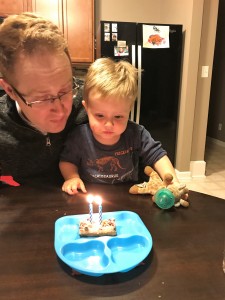 This kid loves to play shy around strangers, but at home he’s a maniac running around and talking up a storm. Most of it’s toddlerese (or Mandarin Chinese, it’s hard to tell), but he has a fair amount of English words in there, including his first sentence, “I see you.” He’s constantly on the phone and going to work. He’ll pack up his work bag, tell you “bye bye love you”, and head for the door. Sometimes he’ll hand you the work bag and push you toward the door while saying “bye bye”. His favorite sentence is, “What’s that?”, and I’m already sad about the day he’ll no longer call peanut butter “bunga” and BBQ sauce “salsa”.

At bedtime he needs his two blankets, Elmo, and pillow in his crib with him. I’ll hold him and sing two rounds of You Are My Sunshine during which he needs to be cheek to cheek; he’ll legit climb me to make it happen if I’m holding him too low. And as soon as I put him in his crib, he pulls his pillow so he can lay his head down on it. Sometimes when I go in to check on him before we go to bed, he’ll still be laying on the pillow while holding Elmo, and there aren’t even words for how cute it all is.

He loves to “sweep” the kitchen floor, dance to heavy metal, “swim” in the bathtub, and pretend to go “night night”. His favorite shows are Elmo, Mickey, and football (and Cops if we’re being completely honest). If he could live off nothing but frozen waffles with peanut butter, Kashi strawberry cereal bars with peanut butter, and tater tots with BBQ sauce, he would. When you ask him if he’s ready to go to school, he yells “EMMA!” at you. This child is 100% insane, and I can only hope that never changes.

This entry was posted on November 9, 2017 by Jenn in Uncategorized and tagged 2ndbirthday, momlife, mommyhood, toddlerlife, toddlermom.