I knew when I dropped an entire jar filled with grease on my kitchen floor New Year’s Day that this year was probably going to be a rough one. I just didn’t expect it to kick in so soon. 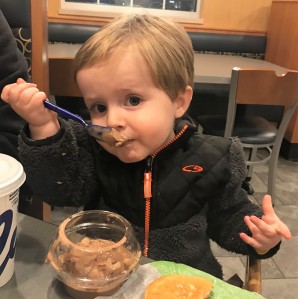 Saturday night Jesse and I were headed to the last good (read: not distracted by school) date night until August when some idiot rear ended us pretty much full speed ahead. He hit us hard enough to shatter Stella’s rear window and push us into the car in front of us hard enough to set off their airbags. Suddenly instead of duckpin bowling, we were ordering pizza and calling State Farm. We know how to party.

This past week has been a blur of phone calls and hurry up and wait which is my least favorite game. But we’re slowly making progress – I have a rental car and we have an appointment with the collision place tomorrow. The fact that they’re making us come in doesn’t bode well, but I’m pretending it’s only because they think I might want my CDs and plastic bag collection while they repair Stella (we haven’t had a car payment in 2 years; let me hold on to this dumb, blind hope as long as I can).

In other news, Jesse’s class started Monday so I’m back to life as a grad school widow. So far it’s mostly consisted of catching up on the DVR and trying to finish The Goldfinch (so good but so long when you have a 2 year old), but I’m sure it’ll get more interesting this weekend when it rains ice and snows 25 feet and I have to somehow make Boogser forget that Jesse’s in the same house.

Speaking of Boogser, he seems to have forgotten how to sleep. He was up every 2 hours Monday night and up at 5 in the am today. I’m guessing it’s teething and hunger related (this kid’s not a big fan of dinner), but someone told me it could also be Type A flu and with the way my luck’s been running lately, it’s definitely the latter.

Let’s end this on a high note: we had the Bills Jags game on Sunday, and with about 90 seconds to go, Jesse declared the Bills were going to win. I declared him crazy to which he responded, “What do I have to do if they lose?” He’ll now be cleaning the bathrooms next week.

This entry was posted on January 10, 2018 by Jenn in Uncategorized.