Dinner with a Toddler

For Christmas, I surprised Jesse with Foo Fighters tickets he had to buy himself because he’s better at stalking the on sale than I am. Needless to say he never saw that gift coming and his mind was blown Christmas morning. He’s finally getting to cash the tickets in this Thursday, and the part of the show I’m most looking forward to is eating dinner without my child. 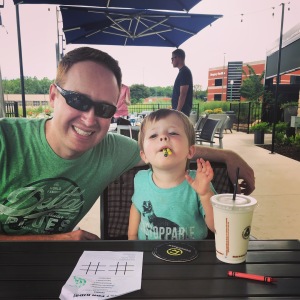 While I love my child, I do not love eating with my child. I maintain some optimism that one day this will change, but for now he eats like a 2 ½ year old (because he is a 2 ½ year old) and it stresses me out. Meals consist of me telling him not to throw food, not to play with food, and that not all food is “ew”; meals do not consist of him acting like a civilized human being, him actually eating anything, or me getting more than 2 bites between requests for food that’s not on the table.

Adding to the delight of dining with my child is his refusal to sit in a booster seat or high chair. Instead, he prefers to sit in a big chair on his knees. The knees not only give him the height he needs to reach the table, they give him the agility he needs to lunge across the table to reach whatever I put on the other side to keep it out of his reach. After several minutes of this, he’ll decide he’d now like to sit on his bottom which will be followed by another decision a few minutes later to sit with mom or dad where he’ll lean back with his feet up on the table in the hopes that maybe this time I’ve gone blind and won’t tell him to get his feet off the table.

So yes, while I’m looking forward to the Foo Fighters show this Thursday night, mostly I’m looking forward to dinner without a 2 ½ year old. Dinner where I can hold a conversation with my husband without having to interrupt said conversation to administer threats of taking plates away if they get flung around one more time. Dinner where I’m not asked for bites off my plate just so I can be told, “That’s ew?” and have said bite handed back after it’s been properly licked and gagged over. Dinner where I can actually taste my food instead of inhaling it as quickly as possible in an attempt to beat the tantrum.

I’m sure I’ll miss Boogser several times Thursday night, but dinner will not be one of them.

This entry was posted on July 24, 2018 by Jenn in Uncategorized and tagged boymom, momlife, mommyhood, mommyproblems, parenting, toddlerlife, toddlermom, toddlerproblems.