This child of mine is never without at least 62 of his possessions within arm’s reach. He sleeps with at least 7 stuffed animals, 2 blankets, and 1 monster truck plus a pile of other random crap on the floor next to his crib. He took a break from his videos here long enough to tell me, “I have a lot of stuff, Mommy!” I birthed a hoarder. 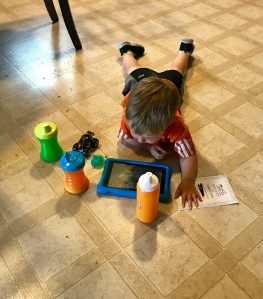 I’m running my first (and probably last) 5k tomorrow so of course there’s a 900% chance for storms at race time and the rest of the day should be fine. Part of me is hoping for the storms since this thing starts hella early and I would gladly take the excuse to sleep in, but most of me is going to be so disappointed if I don’t get to do it. This is the one and only time in my life I’ve felt like I can totally handle a 5k, and if Mother Nature takes this away from me, I may never forgive her (we’re already on unsteady ground thanks to the ragweed).

Boogser’s new favorite thing in life is the lemon slice that comes with your drink at a restaurant. He’ll lick it or suck some of the juice out and tell you “mmmm yummy” while making a face that says this is anything but yummy and then chase it with a shot of milk. He was doing this at dinner the other night when he put 2 slices together and told us it was a watermelon. We told him it was a lemon, he told us again it was a watermelon, so Jesse told him it was a lemonmelon. It’s now a lemonmelon.

I’m back on a Hamilton kick and sweet lady freedom why do I listen to the second act??? There’s not a single good thing that happens in there, and I’m ugly crying pretty much from One Last Time to the end. Someone help me.

I typically use my Thursday lunch break to go pick up groceries (cannot recommend Kroger’s ClickList enough), but a couple times this month I’ve had better offers and gone at 7 in the pm instead. At 7 in the pm, the employees are high school kids instead of retirees, and I have to say the high school kids may be more thorough and polite than the older guys. They haven’t topped the ClickList guy who once killed the wasp in my car though. That dude’s a true American hero.

This entry was posted on August 24, 2018 by Jenn in Uncategorized and tagged fitlife, lifelately, momlife, toddlerlife, wifelife.