I keep forgetting it’s Labor Day weekend which is completely out of character for me. I think it’s because we’re (finally) going on vacation the next week and that’s where my mind is. It’s a nice surprise every time I remember it’s a long weekend though. I also keep forgetting our anniversary is on Tuesday. This is all wreaking total havoc on my meal plan for the week. (Side question: how do people grocery shop without meal planning? How do you know what groceries to get? It stresses me out just thinking about it.) 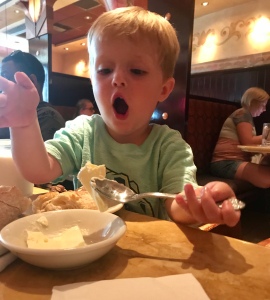 Last Sunday was stupid hot and miserable so for a change of pace air conditioned activity, we went to the Fashion Mall. Boogs was super pumped to go shopping and even though I thought he’d be hella disappointed once he figured out what shopping actually is, he was surprisingly on board the whole time. Because we can’t go to the Fashion Mall without going to the Cheesecake Factory, we stopped for a snack of mac and cheese balls, cheesecake (duh), and cocktails. The cocktails proved crucial because at one point, Boogs stopped flirting with all the ladies sitting around us and started eating butter with a spoon instead. He’s like a tiny Paula Deen minus the racism.

I don’t know if you’re familiar with Larabars, but they’re my new jam. Only the nut and seed ones, though; the texture on the regular ones is a little gross. Although it’s the same texture as the truffles and I’ll eat the hell out of those, too, so I guess I just have double standards which sounds about right. I’ve only had the peanut chocolate flavor so far, but the dark chocolate almond will be coming home from Target with me next time I go. 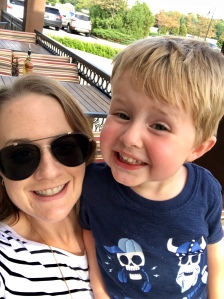 Wednesday I exceeded all expectations and turned 35. I have to say so far 35 is a hell of a lot better than 25. At 25 I was forever stressed out because I did not have my life together; at 35 I’m much more chill about the fact that I do not have my life together. I’ve now been through enough life garbage to know that at the end of the day I have Jesse and Boogs and that’s really all that matters. I also had a birthday shopping spree that never would have happened at 25 which may have nudged me in the direction of embracing 35 with openish arms (which I did by myself for 98% of the day because I am a crotchety old lady who mostly just wants to be left alone).

Gamecocks season starts tomorrow! Jesse asked me a few days ago if I wanted to do ribs for football lunch since the game’s at noon. Clearly this wasn’t even a question and is what will be happening. I asked him what he wanted with the ribs and he told me mac and cheese. That was it. Vegetables are so 2017.

This entry was posted on August 31, 2018 by Jenn in Uncategorized and tagged lifelately, momlife, toddlerlife, wifelife.