I realize it’s only Thursday, but I’ll be in Chicago for Florence + the Machine tomorrow which means today is basically my Friday so here we are. Speaking of Chicago and Florence, we’re leaning towards dinner at Kaiser Tiger because bacon grenades, but we’re also accepting restaurant recommendations for dinner before the show. Bonus points if it’s walkable from the United Center. 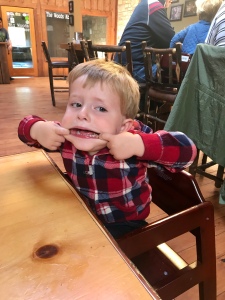 Last weekend Boogser slept until about 9 both Saturday and Sunday (it was growth spurt related and we’re ruining all the sleeping this weekend by going to my parents’ so don’t worry – I’m not jinxing anything talking about this), and he was still on board with a beast of a nap both days. He didn’t argue with  me at all on Sunday when I told him it was nap time (and I had to wake him up after 2 hours), and Saturday we were at Brown County State Park when he told us he wanted to go home and take a nap. You know your kid’s tired when. . . .

Speaking of Brown County, it only took us 5 years to get there! We mostly just went to lunch at Big Woods and then hid at the park because Nashville be crazy in October. We did make a stop at the visitor’s center where Jesse asked them about Clifty Falls and Turkey Run while I stood there like these were completely reasonable questions. We looked it up on a map when we got home and immediately understood why they had looked at us like we were idiots and had no answers. 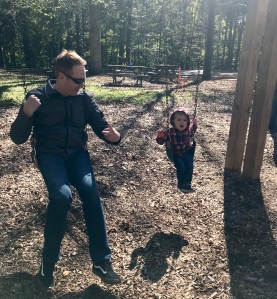 Don’t tell Jesse, but I picked up some Skinny Dipped almonds last time I was at Target, and they’re 100% worth hiding from him. The dark chocolate peanut butter tastes just like a peanut butter cup.

I was listening to the Hozier album the other day and realized I’d forgotten how good that album is. 10 out of 10 would recommend. In other forgotten news, I got my hair cut and eyebrows waxed for the first time since July. I’m always surprised by how much easier it is to style my hair after I get it cut. I’m also always surprised by just how much eyebrow I can grow. It’s impressive really.

This entry was posted on October 18, 2018 by Jenn in Uncategorized and tagged lifelately, momlife, toddlerlife, wifelife.