Sweet Screams Are Made of This

I did it, you guys. I finally figured out how to make weekday mornings less chaotic: you get up at 4 in the am. How do you make yourself actually get up that early? You get a 3 year old with PTSD from the power going out 4 days ago to help. It was out for one hour Saturday night, and this child has not stopped screaming since. 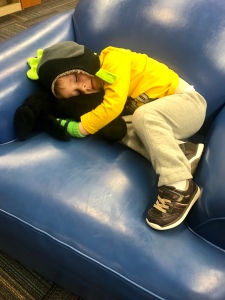 As soon as the power went out at 8:30, Boogser was awake and convinced this was the beginning of the end. I sat in his room with a flashlight trying to get him to go back to sleep until I got tired of sitting on the floor and brought him out to the living room to lay down on the couch with me. About an hour later, the power came back on, I got Boogs back to bed, and – this is where it all went downhill – 2 minutes later the power went out again. It came back on 2 minutes after that and has stayed on since, but that second outage was game over as far as he was concerned.

He’s now spent the last 3 nights screaming for at least an hour and a half when I put him to bed, and he likes to throw another 2 hours of screaming in there at some point in the night (while I’ll be the first to admit I’m a questionable mother at best, I’m not letting him scream for 2 hours straight; I go in intermittently to calm him down so he can start all over again). Trust me when I say this is all even more terrible than it sounds. I haven’t slept in my bed since Friday night, have been up since 4 this morning, and may or may not be Googling how to ghost on your family without turning your husband into a prime murder suspect.

I know that this too shall pass, but we all know patience is not my best life skill. However, I’m also trying to kill the terrible habit I have of wallowing in my exhausted misery so if you’ll indulge me, I’ll explain why Boogser’s refusal to sleep is the best thing ever.

First of all, it’s the perfect excuse to drink insane amounts of coffee. I’m up from one cup a day to at least three cups a day, and I’ve never felt more alive. Secondly, it’s giving me the opportunity to live out my minutes long dream of being one of those people who smugly declares that the secret to their life success is getting up at 4 am to write (technically I started writing this at 6 am but I was up at 4 so it still counts). And – this might be the biggest perk – third of all, it doesn’t make me feel like a garbage mother when I let Boogser watch Umizoomi and videos all morning. This child is fall over tired, and if he won’t sleep, at least he’ll lay on the floor and rest a little.

And now that I have convinced absolutely no one that a child who screams instead of sleeps is nothing but a blessing, let’s all cross our fingers tonight’s the night miracles happen and he sleeps more than he screams. No one’s hoping for this more than the bags under my eyes.

One comment on “Sweet Screams Are Made of This”