This child of mine is still not sleeping, and I’m out of ideas. We’ve tried letting him cry it out for varying amounts of time, we’ve tried telling him we’re closing his bedroom door if he doesn’t stop screaming, we’ve tried promising him a special treat in the morning if he doesn’t scream all night – two of his teachers even told him the power’s not going to go out again so it’s okay to sleep – but none of it’s working. The only way he’ll sleep is if one of us is in the room with him.  I’m dying. Send help. 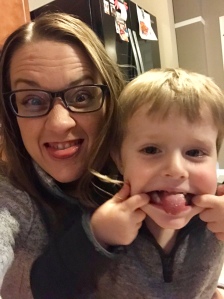 Also killing me this week: Boogser’s sudden penchant for making eggs in the morning. He doesn’t actually eat said eggs but damn if he doesn’t love making them. Because I’m a mean mom, I tell him every morning that no, he cannot have a waffle until he eats his eggs which results in him eating nothing until he gets to school (stop dialing CPS; they have breakfast at school about 15 minutes after he gets there). Yesterday, though, he found a loophole: he had Jesse eat the eggs so he could get the waffle he wanted. If he’s scheming like this at age 3, I’m terrified to see what his teenage years hold.

Our garage door does this really fun trick where it goes down and then goes right back up again so you have to switch it to manual to get it to actually close. Typically if you leave it alone for an hour or so it’ll start working again, but Sunday it decided its work here was done so we called the garage door guy to come fix it. It took him all of 2 minutes, and not only did he show me how to fix it for when it inevitably does it again, he told me he wouldn’t charge anything if we left a Google review. It definitely made up for the fact that I managed to smash the hell out of my fingers putting the door down that morning. (It’s Hamilton Garage Doors if anyone local also has an uncooperative garage door.) 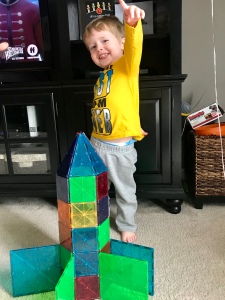 One of my co-workers stopped me a few weeks ago to tell me about a podcast she thought I’d like because, “You seem like you’d enjoy hearing about the demise of people.” I told her to go on, and she told me about The Dream which has a Serial vibe but is all about MLMs. I’m only a few episodes in so it’s mostly just the history of MLMs so far, but it really helps explain the bad rap MLMs get in general. The first episode alone was a fascinating study in just how blindingly dumb people can be.

Jesse’s been telling me for months to go get fitted for real running shoes instead of just buying whatever happens to be in my size at Kohl’s when I have a 30% off coupon. Something about my knees. . .I don’t know, I was half listening. But I finally fully listened and went on Monday and damn if he wasn’t right. Turns out I have high arches and these magical real running shoes I’ve actually been fitted for feel like a whole new foot world. It kind of makes me wonder what other thoughts the man’s had that might be worth listening to.

This entry was posted on January 25, 2019 by Jenn in Uncategorized and tagged fridayfive, lifelately, momlife, wifelife.