Jesse decided that since the Super Bowl was in Atlanta, we should have fried chicken so last Sunday we journeyed north to basically Michigan to pick up said fried chicken (and cheese curds) from Wilson Farm Market. As soon as we pulled into the parking lot, Boogs announced he had to go potty which was less than ideal since while this place is solid on the food front, the bathroom situation is parking lot porta potties. Obviously I made Jesse take him, and he told me that as soon as Boogs got a good look at what he was dealing with, he said, “Maybe there’s another potty?” 2000% my child. His almost daily recounting that “there was poop in it”? 2000% Jesse’s child.

Speaking of Boogs, he freaked out the entire way to school on Monday because “the new car is scary.” When I asked him why it was scary, he told me because he might fall out. Jesse apologized for passing on his neurosis, but I think we’re past the point of apologies covering it.

I’ve been feeling hella overwhelmed/stressed out/anxious lately (it’s a lot of contributing factors), but the other day when I was sitting at work quietly freaking out over Boogser’s high school years (what if he gets straight Fs, what if he’s a general delinquent, what if he’s not doing extracurriculars which means he gets no scholarships and has to live out his days in our basement when we don’t even have a basement. . .or corndogs. . .oh no, what if he likes corndogs???), I realized I need to start doing something to calm the hell down. So I did a 5 minute meditation on the Headspace app, and I have to say it actually helped. It looks like the first 10 sessions are free and then you have to pay so it also looks like I’ll be doing the first 10 sessions on repeat. 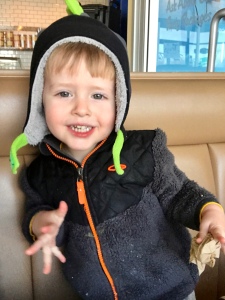 Jesse is forever cleaning his glasses. Like every 5 minutes forever cleaning his glasses (he’s either very sweaty or very greasy but I don’t want to think too hard to figure it out because neither option is not gross). Making it even more irritating is he’s forever losing those little cloths they give you at the eye doctor and asking me if I have one like I share his obsession and he hasn’t already lost the ones I gave him. So in a moment of what could definitely be called desperation, I got him Peeps for Christmas, and it’s been life altering. I mean, he still loses it on the regular and is still obsessively cleaning his glasses, but I’m not having to hear about those stupid cloths anymore which is really all I can ask for in this situation.

A co-worker and I were comparing our Fitbits (I have an Alta HR, he has a Charge 3 I’ve been eyeing) and started talking about the sleep tracker function. I said I don’t normally wear it to bed because a) thanks to Boogser’s terrible sleeping habits, it’s depressing to see, and b) what do you even do with that information? Like okay, I see I’m not getting a lot of deep sleep, but you can’t really do much to fix that. He countered that you actually can because you can do things like cut back on caffeine. And that’s when I cut him out of my life. Problem solved.

This entry was posted on February 8, 2019 by Jenn in Friday Five and tagged lifelately, momlife, wifelife.