I had such big plans for this little blog the last week, and then everything went to hell in a handbasket. Long story short, last Wednesday we learned that Entercom sold our radio stations to Cumulus who already has stations here so no one knows if they have a job or not as of March 1st. It’s exciting times. And further proof that February is the worst month of the year. But Jesse and I have been through this before, and we’ll survive. . .only to probably go through it again at some point because radio.

In other Earth shattering news, while the rest of the world celebrated Valentine’s Day last week, we celebrated Jesse’s birthday! He turned 97 but doesn’t look a day over Bernie Sanders. Per usual, his only request was a burrito so I Door Dashed Chipotle for dinner. I got Boogs the build your own kids meal with guac like I always do because he’ll actually eat it so of course this time he told me, “I don’t like guac” and proceeded to eat everything but the guac. He had no problems liking the cheesecake I picked up for dessert though. I got two slices at Cheesecake Factory because decisions are hard so we had leftovers Friday. Boogs insisted we do candles in the half eaten cheesecake and sing again, and then he claimed the s’mores leftovers as solely his. When I took a bite, he asked me, “Why are you eating my cake?” He’s not out of control at all.

The “I don’t like guac” declaration threw my brother-in-law off, too. We went to Champaign last Saturday for my nieces’ and sister’s dance recital, and he told me he didn’t know what Boogs would eat for lunch but he knew he’d eat guac so he got that. Surprise. Instead, Boogs ate half a can of chips and maybe two bites of turkey sandwich before he went back to living his best life playing with all his cousins’ princess toys and bossing their dog around. 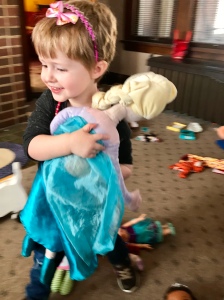 This dance recital was a spectacle by the way. I was expecting each class to go out, twirl and leap for a few minutes, and then move on to the next one like the never ending dance recitals of my childhood. Nope. This thing was a full blown ballet with a storyline and everything. Niece 1 was easy to pick out, but niece 2 was in a head to toe chicken costume and harder to find. So much harder in fact, that Boogs will endlessly argue with you that she wasn’t even in it.

We took Boogs to see Paw Patrol Live at the end of December, and he hasn’t watched a single episode since. . .until yesterday. He’s been watching the same half episode on repeat for two days now, and a) it’s still better than Frozen, but more importantly, b) his timing could not be more perfect – the Paw Patrol exhibit at the Children’s Museum opens tomorrow, and we’re going to the donor preview night tonight (he was still super into the books and toys so I knew it was a safe bet). We told him last night we’d be going to the Children’s Museum after school to have dinner and see Paw Patrol stuff, and he’s been telling us since, “I need to eat dinner first.” He asks me about dinner before 7 just about every morning, it’s one of – if not the – first things he asks me about when I pick him up from school. . .without a doubt, he is 1000% his father’s mini me.

This entry was posted on February 22, 2019 by Jenn in Friday Five, Uncategorized and tagged fridayfive, lifelately, momlife, wifelife.