Mornings have been ROUGH over here. Boogser has been sleeping worse than ever which means we’ve all been sleeping worse than ever and no one has any patience for anything. It maybe wouldn’t be quite so bad if sleep deprived Boogs didn’t love to get himself into trouble, but he does so every morning starts with at least one round of time out. After tantrum number 83 this morning he told me, “You’re not my best friend anymore,” so now you understand just how serious this is. But I’ve had an excessive amount of coffee and the Spotify 90s Smash Hits playlist is blasting so let’s pretend like I don’t spend half my waking hours dreaming of running away and do this. 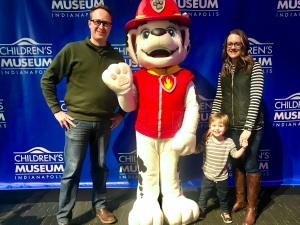 Travel back in time with me to the end of February when the Paw Patrol exhibit opened at the Children’s Museum. We went to the donor preview night (which ended up being the smartest thing we’ve ever done because that exhibit has been packed since it opened) which included the exhibit, dinner, and a character meet and greet. I was really hoping it would be with Skye since she’s Boogser’s absolute favorite, but it was Chase when we got in line and he swapped out with Marshall by the time we got up there. As Chase made his exit, his security detail was overrun by a bunch of tiny humans wanting to give him a hug, including my tiny human. Boogs looked at me, said “I wanna give Chase a hug,” and took off. He also walked right up to Marshall to give him a hug when it was our turn. This kid is only 3 years old and already braver than I’ll ever be. As proof, please note how I used him as a buffer between me and Marshall for the picture.

Still time traveling here. . .I finished reading The Last Mrs. Parrish a few weeks ago, and that book is wild. The first part’s kind of slow and the writing’s not super great, but then the second half really picks up and you don’t even care that the writing’s not that great; you just want to know what happens next. I highly recommend it if you’re looking for a quick, easy read that makes you forget you’re living in a world where you may or may not have a job in a few weeks. (Sidenote: I get to keep my job. Holla.)

Boogs got me the Skinnytaste One and Done cookbook for Christmas (which is a move filled with sweet delicious irony since he declares everything I make for dinner “not tasty for me”), and it might be my favorite of her cookbooks. The recipes aren’t all super quick so I’ve been doing them mostly on the weekends, but they’re fairly easy and every one I’ve tried so far has been a keeper. Also worth noting: I don’t have an air fryer or an Instant Pot but she gives alternative cooking options for most of those recipes so I still think the book’s totally worth it.

I suppose I should go ahead and break the news that Jesse and I are now the parents of two. Boogs spent a solid 30 minutes Sunday night telling us all about his little brother, Teepee. Teepee is very tiny – he fits in the palm of Boogser’s hand – and his room is a teepee made of Magnatiles. Jesse puts Teepee to bed each night, and Boogs makes him breakfast each morning. This, combined with Teepee doing a good job sleeping each night and appearing out of nowhere thereby skipping over pregnancy joys like heartburn and hair loss, means this second child is actually my favorite child. But don’t tell Boogs.

This entry was posted on March 15, 2019 by Jenn in Friday Five and tagged fridayfive, lifelately, momlife, wifelife.