It was 80 yesterday. EIGHTY! IN EARLY APRIL! (I was just a little excited.) We’re back to 60s with rain today, but man was it glorious while it lasted. Granted I was stuck inside at work for most of it, but I did get to wear my new shoes, and it’s safe to say I’m in love. It looks like they’re still 40% off so this is shaping up to be the single greatest day of your life. Worth noting: the website says to go up a size, but I went with my usual 6 ½ and they fit just right. Of course, it’s also Nordstrom which is free shipping both ways so you could always order 2 sizes and send back the ones that don’t fit. Not that I’ve done that before. . . . 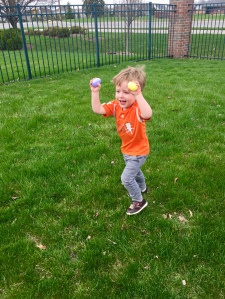 Other purchases worth every penny, this tote organizer. Jesse read my mind and got me the most perfect fancy giant tote bag for Christmas and after a few months of never being able to find anything in it, I finally got a fancy giant tote bag organizer. I can still fit everything (wallet, phone, laptop, planner, pull up, etc.) in said giant tote, but now I can also actually find what I’m looking for. Wonders never cease.

We switched Boogser’s crib to a toddler bed about 6 months ago, and it was such a disaster we put his crib back together and left it that way until a few weeks ago when he started telling me things like, “I don’t know how to get out of here.” The good news is he’s not falling out this time; the bad news is he definitely knows how to get out now. I’m about to the point where I’m ready to run away forever so everyone reading this, I need you to please make sure my husband doesn’t end up arrested for murder when I disappear without a trace. He can live out his Cops dreams and lead a high speed chase and then be interrogated for awhile, that’s fine, but don’t let him end up in jail. We all know he wouldn’t last 5 minutes. 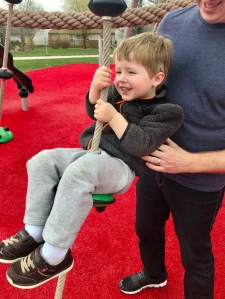 The amount of peanut butter we go through in our house is impressive, but Jesse and I differ vastly on what constitutes an empty jar. I will gladly take his copious discards, however, and make overnight oats out of them. The only problem with this plan is Boogs. I have to hide the jar from him or else he freaks out about me taking all the peanut butter. I’ve explained what’s actually happening to him numerous times, but he still yells at me that the peanut butter’s not all for me. I’ve definitely created a monster; I just can’t tell on what front.

Speaking of Boogs and food, he’s been super into some cupcake video he found on his Amazon tablet. It’s some British lady who makes fancy cupcakes which, while far superior to the Twins with Toys nonsense he favors when given free reign of the YouTube, is giving him ideas that he, too, needs to make Elsa cupcakes. This would maybe be okay if a) they weren’t overly elaborate cupcakes or b) I had mad baking skills, but neither of these scenarios is our reality. What he really needs is to have been born to Aunt Poochie. But he’s stuck with me so instead of fancy cupcakes, he’s getting bowls of cereal. They’re Kashi bowls of cereal, though, so he’s at least getting the fancy.

This entry was posted on April 12, 2019 by Jenn in Friday Five and tagged fridayfive, lifelately, momlife, wifelife.