PEOPLE OF THE INDIANA! I HAVE MADE THE MOST MIRACULOUS COFFEE SHOP DISCOVERY. IT’S CALLED JAVA HOUSE AND YOU MUST GO TO THERE IMMEDIATELY (OR BUY IT AT THE STORE WHICH I JUST DISCOVERED IS ALSO AN OPTION IN LIFE). IT GIVES YOU ALL THE CAFFEINE SO YOU CAN WRITE IN ALL CAPS AND IMPRESS UPON YOUR PUBLIC THE SERIOUSNESS OF THE SITUATION. Seriously, though, it was an amazing find. I ordered one of the specialty drinks (it’s been less than 3 hours and I already forget what it’s called but salted caramel was involved) which I thought was going to be a salted caramel cold brew, but it was not. The barista asking if I wanted it iced or blended should have been my clue that it was going to be more like a milkshake, but I never claimed to be the smartest so it showing up looking and tasting like a milkshake was my clue that it was more like a milkshake. I regret nothing. It’s right next to Patachou at Clay Terrace if you want to never again be satisfied with Starbucks. 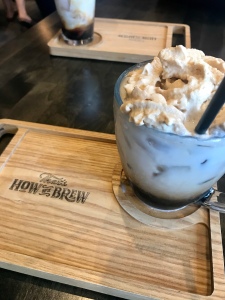 Speaking of Clay Terrace, I finally had Boogser pick out a helmet (Frozen obviously), and in his mind, a helmet is not complete unless it has a scooter to go with it which is how we learned Dick’s does not have scooters. They have many a bike and rollerblade but no scooters. Please learn from my mistakes and start your scooter search at Target where the scooters are plentiful. Also learn from my mistakes and wait until you’re ready to immediately build said scooter before buying one.

Last Sunday Boogs was sitting on the floor in the living room and out of nowhere started yelling “ow” which was slightly alarming and made even more alarming once I learned the “ow” was in response to shoving an unpopped popcorn kernel up his nose. I normally catch all of those before I hand him the bowl, but clearly I missed one and he decided that the ideal place to store it was his nose. We got lucky and he eventually managed to blow it out, but I kind of wish it hadn’t been that easy because we all know this child did not learn his lesson. 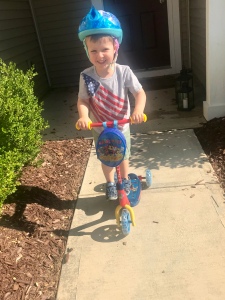 Pro tip: romaine lettuce will elevate anything. I made BLTs for lunch on the 4th of July and since we had leftover romaine and tomato slices for days, it all made its way onto turkey sandwiches and bison burgers and we were pretty sure we were at a 5 star restaurant the whole time. It’s also possible we’re easily confused and/or don’t get out much, but I’m making the argument for romaine making anything fancy. Even oatmeal.

We’re taking Boogser to his first movie tomorrow, and because we are fools, it’s not like a regular movie, it’s a cool movie: The Little Mermaid with the Indianapolis Symphony Orchestra. Jesse and I went a few years ago for one of the Harry Potter movies and it was amazing, but Boogs is pretty sure Ariel’s actually going to be there and keeps asking if we can dance so I have some concerns. Wish us luck.

This entry was posted on July 19, 2019 by Jenn in Friday Five and tagged fridayfive, lifelately, momlife, wifelife.