I turned 36 last week. Thirty. Six. An age 16 year old me never saw coming. Not that 16 year old me was battling any illnesses or engaging in any reckless behavior; she was just an idiot who thought 36 may as well be 106 and was pretty sure she’d never even live to see 30. But she did. And while I think 16 year old Jenn would fall over in shock at turning 36, I don’t think that’s the only thing that would shock her. 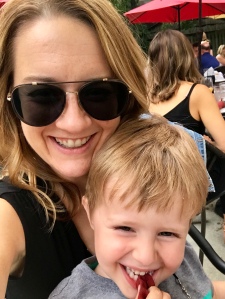 16 year old Jenn had a life plan that looked a lot like married with kids by age 25 and a permanent residence in Chicagoland. She also lived for a good traffic jam and swore she’d never clean the bathroom just because someone was coming over so, like I said, she was a real idiot.

But while pretty much nothing has gone the way 16 year old Jenn predicted, I don’t think she’d be mad at how it’s played out so far. I think 16 year old me would give 36 year old me the highest of fives for making it this far – after all, we really did not think we’d ever see 30 so an extra six years? We’re doing okay.

I think 16 year old me would be okay with being neither married nor a mom by age 25 – especially when I explain to her who Keith Urban is and how this delay means he hugs us twice.

I think 16 year old me would be amazed at making a career out of radio – especially after her fascination with Ellen’s mom in the Sweet Valley High books. I mean, she was a news anchor and how cool would it be to have a mom who’s a news anchor except now it’s like we’re the news anchor! We can barely handle ourselves right now.

And while I think overall 16 year old me would heartily approve of 36 year old me, I also think she would be beyond appalled that we started this 36th year of our life running 3.6 miles without anyone chasing us. Are we sure there’s not a dementia test we should be taking at this advanced age of ours? Because it seems as though we’ve lost our damn mind.

This entry was posted on September 3, 2019 by Jenn in Uncategorized and tagged birthday.