On Mondays and Grown Men: A TED Talk

I like Monday because it’s a fresh start. The disaster I was last week no longer exists. Monday Jenn comes in hot with the motivation to destroy her to do list and not DoorDash all week long. I definitely start to fade by Tuesday, and by Wednesday I’m just over here doing what it takes to survive, but for those 24 hours I’m filled with optimism and fire. This Monday though. . . .

It all started four years ago when Boogs was born. Flash forward to his four year check up at the pediatrician this morning and me driving straight into a parked car. I wasn’t even going backwards so I hope we can all take a moment to appreciate the level of skill that required (it’s a super tight parking lot and I wasn’t turning quite tight enough and managed to hit the back of the car next to me – extra highlight was her husband in the car on the other side of me watching the whole thing happen). In my defense, I have always been terrible at parking. Beyond terrible really.

I can tell I’ve made a big mental shift in the last year or so because I actually didn’t let hitting that car ruin my day. I did, however, let it ruin my focus and I have accomplished basically nothing today, and as we established above, I’m down to less than 24 hours before the whole week gets away from me so I figured if I do nothing else today, I’ll at least hit publish on a blog post. And that means we’re talking about the grown man that is my child.

Boogs turned 4 on Saturday and he pretty much no longer needs me and Jesse. For months now, he has not had time to wait for either of us to start the bath for him; it’s been a long day and he has a soak to get to so he’ll just start it himself thanks. And while he’s at it, he’ll rinse his own hair but thank you for offering. 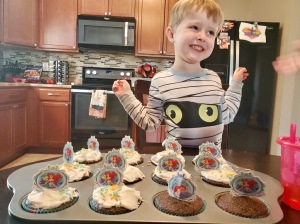 If there are pancakes for breakfast, he’s going to need you to move out of the way and let him handle it. I mean, how hard can it be to dump out some mix, add some water, and half ass stir it all up? Not so hard a 4 year old can’t handle it. Same goes for baking. If something needs to be dumped in a bowl, a few eggshells mixed in, and a spoon or two licked, he’s all over it.

Getting dressed, however, is hit or miss. Part of him wants to do it himself, but more of him wants to do it “like a baby” where he lays down and you get him dressed like you did when he was a baby. He will fight you to be the one to fold his pajamas back up to put in the dresser, though.

He now climbs up into his car seat, hasn’t used a high chair or booster seat for years, and toasts his own waffles and makes his own popcorn (provided someone holds him so he can reach the toaster and microwave). He will Hulk out if anyone other than him hits the start button on the washer or dryer and he lives for chores to do.

He’s also the reason I drove into that parked car this morning (if he hadn’t been born, I wouldn’t have been at the pediatrician’s, remember?), but I’ll let it slide. Partially because he’s now a grown man who doesn’t even cry during a flu shot, but mostly because he’ll do the chores I don’t want to do.